The reverse side of the medals of the 2008 Summer Olympics: silver (left), gold (center), bronze (right). Each medal has a ring of jade. (Photo credit: Wikipedia)

EzyCash wants to buy your silver. It could be broken silver, scrap silver or unwanted silver from jewellery.

It could even be silver from an Olympic silver medal.

The silver medal is traditionally given to the second place finisher at the Olympic Games. At the first Olympics in 1896, the first and second place medals were made of actual gold and silver. The last gold medals to be made entirely out of gold were handed out at the 1912 Olympic Games.

Nowadays, the gold medal is covered in 6 grams of gold, while the silver medals have to be made of at least 92.5% silver.

If you happen to have a silver medal lying around at home, or silver coins or any other type of silver, bring it into EzyCash shop in Panmure, Auckland for a top cash price. 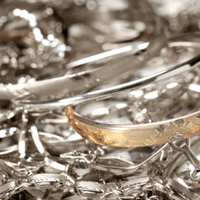 Why is silver seen as such a precious metal?

Silver is just above gold in the periodic table, so has a very similar make-up to gold.

Silver is a good weight, silver is beautiful to look at and silver does not corrode.

Silver is also very easy to work with – silver has been worked into shapes and used since the times of early man. Silver was first mined in 3000BC but it wasn’t until around 500BC that it was recognised as official coinage.

What is silver used for?

We know that silver is used to make silverware and jewellery but silver is also used extensively in industry. Silver is commonly used within appliances switches. Within the switches, contacts made of silver make switching the appliance on and off, safe.

Silver has had many other uses. Water, milk, wine and vinegar remain purer for longer within silver vessels. Thousands of years ago King Cyrus of Persia would store his water, drawn from a specific stream, in silver containers to be carried around in carts wherever he went.

In 1813, Nicholas Niepce created the first photographic image with the help of silver nitrate.

In 1884, Dr Carl Crede used silver to help halt a disease that was causing generations of children to be blind at birth.

Silver paste is used in the most common type of solar panel for creating electricity.

Silver can aid water purification. Silver prevents bacteria and algae build-up and is safer than chemicals used for the same purpose (such as chlorine and bromine). And specifically, silver ions can destroy Legionnaire’s Disease.

In the medical world, silver infused bandages are helping burn and wound victims by preventing infection and speeding healing.

In April last year the price of silver peaked at US$49 a troy ounce.  Currently the spot price of a troy kilo of silver is around NZ$1214 – an increase in the silver price of over 100% cent in the past five years.

This increase in the price of silver is due to a shrinking supply of silver around the world.  And this silver supply is set to shrink slightly further due to an announcement by the Mining Health and Safety Administration in the US.  The Administration has ordered the temporary closure of the silver shaft at the Lucky Friday silver mine in Mullan, Idaho.

The silver mine, owned by Hecla Mining Company, will be closed for maintenance and cleaning until early 2013.  Over time, sand and concrete material has built up in the silver mine and must be removed by power cleaning to prevent future hazards. END_OF_DOCUMENT_TOKEN_TO_BE_REPLACED