Christmas Coming Up and You Need A Few Extra Dollars

Christmas is the most important holiday throughout the western world and for many other people as well. Even after our exhausting schedules, we find time to celebrate Christmas with our friends and family. But celebrating Christmas also takes a toll on your bank account. Spending money on decorations, gifts and Xmas food & catering can be expensive.
It is very likely for many of us that some extra funds during the holiday season would be Nice. Fortunately, there are some very easy ways to get extra Cash for Christmas.

Get Cash by selling your old Gold Jewellery

Your old jewellery like diamond, gold and silver jewellery may have fallen out of trend, you may be bored with them using the same jewellery again and again and want something New and exciting. Well the solution is easy; why not trade your old jewellery in for instant cash?
EzyCash Gold Buyers & Loans may be just what you need, we specialize in buying any type of Gold from Old Broken pieces of Jewellery to 22ct Indian Jewellery, .9999 Chinese Fine Gold Jewellery, Coins, Bars, Nuggets even Old gold teeth, you name it, if it’s Gold then we Buy it.
The whole process is quick and easy, an on the spot No obligation evaluation is carried out with-in minutes on your jewellery and items and a market price for it is provided, if approved then Government photo I.D needs to be provided, change of ownership paperwork is done and then Cash payment is made straight away (or any other form of payment that you may prefer).

You may also have old gold scrap, which are often the broken pieces of jewellery and their components. These items are totally useless and cannot be used any further for any purpose. While you may think that the scrap has lost all its value, you can still get a good price for it when you sell it to EzyCash Gold Buyers & Loans Licensed Pawnbrokers. Jewellery can be melted down and recycled & then recreated into New jewellery of different types & shapes.
While you may also sell other items such as your old electronics to get cash, selling your old Gold jewellery can yield a larger amount of cash which will help you with a bigger and brighter Christmas and all you need to do is contact EzyCash Gold Buyers & Loans to get the best value for your old and non-usable jewellery.

Merry Xmas and a Happy New Year everyone.

Why it is a great idea to sell your gold jewellery for cash? 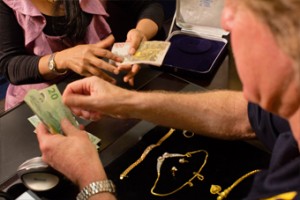 Why is it a good idea to sell your gold jewellery for cash?

You get to Cash in hand without any hassles.

Whether you have been saving so that you can purchase your perfect new item, or you are urgently in need of money to help you meet unexpected expenses, old and unwanted gold jewellery is a great source of fast and easy money. All it takes is searching through your jewellery collection and sampling jewellery pieces that are hopelessly outdated, no longer wearable or broken, and let us give you fast cash for them.

We will walk you through the valuation process, and you will receive the value of your Gold items in cash. END_OF_DOCUMENT_TOKEN_TO_BE_REPLACED 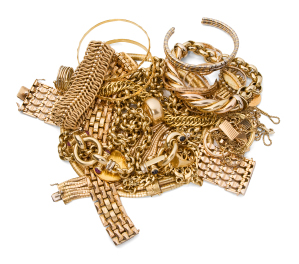 There are many ways to make money. But, there are few ways to get money fast. What if you need some cash in an emergency? What if your friends or family cannot help you with a loan or finance and you need money urgency. Here is the solution for you; you can get cash for gold easily and without any fuss. At this moment, sometimes the only thing to do is to get your old gold jewellery items exchanged with fast cash from the best dealers at the best prices. It is the best and fastest way to get cash from your old fashioned gold jewellery, gold coins or any other gold items.

The gold that is in the form of a jewellery pieces such as necklace, bracelet, ring, or a set of earrings, an old fashioned gold watch may be valuable for you because of its design and the times or person it reminds you of, However, a professional gold buyer who pays cash for gold will buy it for its scrap value and you are paid only according to the weight and purity of the metal.
This is why if you genuinely feel that the jewellery carries sentimental value or is a family heirloom, you should not sell it. The ideal items to sell are the ones that you have hidden away in the corner of your closet or draws because they are useless, broken, stained, or simply something that you are not “emotionally attached” to.

Selling broken and unusable gold jewellery is a fine idea because the cash that it brings can be used for some other, more productive purposes. You can invest the amount in your bank savings account to earn more interest. Alternatively, if your house needs a new appliance or furnishing, the amount (received through gold sale) can be used to purchase, or at least make a part of payment against it.

With increasing competition in the world, there are a lot of companies and dealers that are ready to exchange gold for cash. But, you have to look for the reputed and genuine dealers who can offer best prices for your gold jewellery. You can get a good sum of cash by exchanging your unwanted and unused gold items for a good amount of money. You will never get your Retail value back for your gold jewellery that you are exchanging but a percentage of it as the value will only be for the gold content which has been very high and has stayed high in price since 2008 and the Global financial crisis.

Since then the price of gold has gone up so far that in a lot of cases you are at no loss when you are selling your gold jewellery or when you are exchanging it for cash.

Are you sitting on a GOLDMINE?!

Almost all cultures are fascinated with gold.

Gold can’t be artificially produced.  It doesn’t corrode like iron or poison like lead. It’s rare but not too rare, and as gold is relatively easy to extract from the earth and smelt, it was the ideal metal to be used as currency.

Gold is the most malleable and ductile of all metals.  An ounce of gold makes more than 80 km of thin gold wire, or a sheet of gold covering 9 square metres. This gold is used in industry for conducting heat and electricity.

People also love the way gold looks – its sheen and colour – and have always created stunning jewellery with it.

For all of these reasons, even though the price fluctuates, gold remains popular and valuable. And that’s why you can turn your unwanted, broken or unfashionable gold jewellery into CASH!

EzyCash Gold Buyers buy your broken and dated gold jewellery for cash, giving you the best price, in cash, instantly.

Auckland’s EzyCash Gold Buyers are knowledgeable high-end vintage and second-hand gold, diamond jewellery and luxury watch appraisers.  They use only the latest technology to value your gold. You can be certain you’ll receive a fair appraisal and the very best price for your unwanted gold jewellery.

Get in touch today… because you might be sitting on a GOLDMINE!

Bored of your old gold rings? 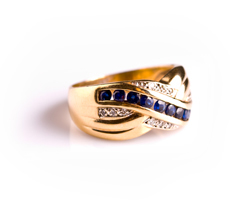 Hugely successful NZ fantasy films like the Lord of the Rings trilogy and The Hobbit, and television series like Game of Thrones, have entertained millions.

The fantasy genre is very popular right now – and having a huge effect on fashion.  Jewellery is no exception.

India Nicholson of Jeweller Magazine writes that “a recent collaboration between London-based Crow’s Nest Jewels and Walt Disney is one of the many jewellery collections that have emerged from a fantasy juggernaut.”

NZ suppliers Worth & Douglas hold the licensing rights for The Hobbit and The Lord of the Rings jewellery, including the famed gold “One Ring”.

As any Lord of the Rings fan knows, a gold ring is always valuable.

Since ancient times, gold rings have symbolised engagement or marriage, status or been used as a seal for personal or business use.

But sometimes, a gold ring is not something you want to keep.

If you have inherited or been given a gold ring you don’t want to wear, you can easily get your gold ring and jewellery instantly valued by EzyCash Gold Buyers.

Auckland’s EzyCash Gold Buyers are knowledgeable high-end vintage and second-hand gold and diamond jewellery, and luxury watch, appraisers.  They use only the latest technology to value your gold. You can be certain you’ll receive a fair appraisal and the very best price for when they buy your unwanted gold jewellery. 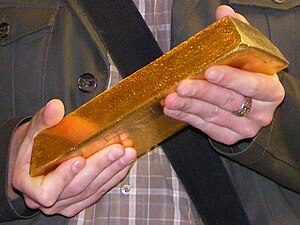 If you want to sell your unwanted gold jewellery, broken gold or scrap gold, the place to come is of course EzyCash Gold Buyers in Panmure, Auckland.  You’re always guaranteed an expert valuation of your scrap gold or broken gold and you’ll receive a top cash price.

But as well as being the best place to sell your unwanted gold, EzyCash Gold Buyers is now offering you an opportunity to become a gold investor.  Right now, EzyCash has a selection of gold bullion and silver bullion available for purchase that could become an investment into your future.

By turning your paper wealth into precious metals, you could protect yourself from one of economic’s inevitabilities:  inflation. END_OF_DOCUMENT_TOKEN_TO_BE_REPLACED

The history of gold traders, gold buyers and pawn brokers

EzyCash Gold Buyers – a pawnbroker and gold trader in the age old tradition.

EzyCash Gold Buyers is an old fashioned grass roots gold trader offering people a good straight deal, based on expert analysis of their gold, when they need to access cash money.

Whether you’re in need of cash quickly or simply have unwanted gold jewellery, broken gold jewellery or scrap gold around the home and want to know its value – bring it into EzyCash Gold Buyers in Panmure, Auckland for an expert valuation.  You’ll receive a top cash price for your gold.

Selling gold through the ages

In some circles, pawnbrokers and gold traders are seen in a negative light.  But gold traders and pawnbrokers have been around for thousands of years, their services have historically been used by European monarchies and even Franciscan monks in order to aid the poor.

The New World (what we now know asAmerica) may not have been discovered had it not been for the practice of pawn broking and gold trading.  Christopher Columbus, looking for royal backing for his proposed voyage across the Atlantic Ocean in search of the New World, was turned down twice by the Portugese monarchy.

So he focused his attention on Spain.

He was granted an audience with Queen Isabella but, on the advice of her confessor, she turned him down also.  Fortunately Isabella’s husband Ferdinand intervened and convinced the Queen to grant his request.

Spain was financially crippled from a war against Muslims in the south of the country, so it meant that Isabella was forced to borrow against the value of her crown jewels in order to finance Columbus’ voyage.  His discoveries started a golden age of discovery and power for the Spanish empire – thanks in no small part to the industry of pawnbroking and gold trading that freed up the capital needed.

You may not be trying to finance a voyage across the seas, but if you simply need cash quickly you can’t do better than EzyCash Gold Buyers in Panmure, Auckland for an honest, trustworthy and expert pawnbroker and gold trader.

We are open under Covid Alert Red Traffic Light Level,
Please phone 5701511 for all Enquiries.