Get your gold jewellery accurately analysed 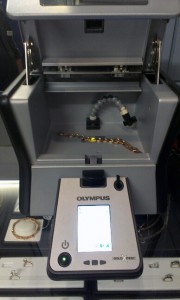 When we think of gold – many of us think of bullion bars, gold coins or gold jewellery. Globally world consumption of mined gold is about half for use in jewellery, 40 percent for investment purposes and the rest is used in industry.

Gold is a popular symbol for power, richness and royalty – and these representations are what make gold popular for jewellery as well as the softness of pure gold and its ability to be crafted to an almost limitless number of shapes and styles. Gold is often mixed with other alloys for use in the manufacture of jewellery to provide a variety of colour and hardness to gold jewellery with copper being the most popular base metal.

It is because of these “mixed” alloys found in most gold jewellery that the first thing to do when looking for a valuation on your gold jewellery is to identify what the percentage – or carats (k) of gold is present. The basic, and still quite common test is the “acid” test – where literally acid is applied to a scratching of the jewellery. A soft sandpaper is rubbed against the piece to be valued, and the fine dust produced has a few drops of acid applied. The reaction from this turns the acid a particular colour – depending on the purity of the gold, and from this “acid test” a piece of gold or gold jewellery can then be valued.

There is also a more “primitive” displacement method, where your gold item is placed in water and the amount of water displaced can provide an indication as to the purity of the item.

But to get real certainty as to the value of your precious gold jewellery at Ezycash Goldbuyers they have a proper X-Ray machine that accurately identifies the purity of gold in any gold piece, providing you the best valuation for your gold bullion, coin or jewellery.

This clever machine, called the Gold Xpert is manufactured by Olympus and as you can see from the images it provides the most accurate analysis of your gold – enabling you to get the best possible price.

So if you want to see the Gold Xpert in action – take your gold jewellery, gold bullion piece or even gold nugget to the team and Ezycash Goldbuyers and ask for a complimentary X-Ray!

You can make a mint from gold – to coin a phrase! 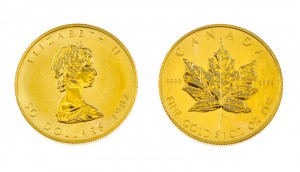 Since the earliest of times man has found uses for gold for both ornamental and religious purposes but also as a representation of wealth.

In more recent history – gold was used a currency and means of exchange between nations.
Current use of gold is split nearly 50/50 between jewellery vs investments and industrial use and its history as coinage has helped gold maintain appeal as an investment.

The first know gold coins were in use in Asia Minor around 600BC and gold coin became a popular European currency from the 14th century.

It was during the industrial era that bills (or cheques) gained popularity representing a face value redeemable in gold – which remained in the bank.

The value of gold is based on its purity. Pure gold is rated as 24 carats (k) and coins generally have another metal added to aid coin hardness which dilutes this purity. English gold crowns coins, which circulated from 1526 and into the 1930s were a standard 22k and American gold coins minted in the early 1800’s had a purity of 21.6k.

Today, gold coins for investment or collector purposes don’t get handled so much (they are certainly not seen in tip jars around town!), so they are minted at 24k. There are a few exceptions but it is the Special Issue Canadian Gold Maple Leaf coin that has the highest purity at 99.999%.

Some gold coins you could find under the sofa cushions;

If you do happen to find one of these coins under the sofa cushion, you may try to do what was an old tradition of biting a coin to check if it was genuine.

An early form of counterfeiting was to cover a lead “coin” in gold plate to pass it off as a full value gold coin. If the coin was a fake – the bite test would leave a clear indentation. A more professional test of the time was to cross check the weight of the coin against its size by passing the coin through a narrow slot.

At EzyCash GoldBuyers –you will be pleased to hear that you don’t need to worry about us breaking our dentures biting your gold coin to check its authenticity – we will use our fandangled analysis machine to do a quick, spit free and accurate test – and ensure you get the best possible price for your gold coins.

Get Gold Tested Without Damage To Jewellery

EzyCash Gold Buyers now offers extremely accurate gold quality testing with the use of our new X-ray gold testing machine. This gold testing machine allows us to provide accurate readings on the quality of gold jewellery, gold pieces, coins and other gold plated items through non-destructive X-ray technology. This eliminates the need for messy, dangerous acid testing and ensures that your pieces of gold jewellery do not need to be damaged in order to determine their quality.

If you’ve ever bought a piece of gold jewellery, you’ve likely heard the piece described in terms of ‘carats’. The term carat is used as a unit of purity for gold, however carats can also be used to describe mass, or weight of stones such as diamonds or other gemstones. Understanding these terms and measurements can help you determine the value of your gold jewellery.

Due to the soft and pliable nature of gold, it is often mixed, or ‘alloyed’, with other metals such as copper or silver to make jewellery to add strength or hardness. The amount of metal added to the gold is measured to determine the final carat rating of the gold jewellery. Therefore, the carats are used to describe the level of pure gold in a piece of jewellery.

Each carat represents 1/24th of the whole, so 24-carat gold is pure gold, or 18-carat gold is made up of 18 parts gold and 6 parts of another type of metal, or alloys, such as copper (that is, 75% gold and 25% other metals) etc. The higher the number of carats, then the higher the gold content is in the piece of gold jewellery. This is used for both gold in the form of jewellery and also gold in bullion bars or coins.

It is standard practice for gold jewellery to be stamped with a marking that indicates this metal content. It will usually be placed somewhere inconspicuous on the piece where it will not be affected by size changes or near stones or designs.

Professional gold valuers will use certain measures to ascertain the purity of your gold pieces and determine its true value. At EzyCash Gold Buyers we provide fair and accurate valuations for gold jewellery, watches, diamonds and gold pieces and will offer a fair cash price in exchange for your jewellery.

Well we have seen some very interesting movement in the price of both Gold & Silver in the last two months, both prices surging forward and now dropping in spot price making selling a very real option for a lot of people.

One question I get asked just about every other day by clients and customers being a precious metals dealer is “what’s happening with the gold price” and “will silver continue to drop or will it continue to climb”.

This is certainly one question I couldn’t hazard a guess to, but I am quite often reminded of one of my old business associates philosophies, he would say to me on quite a regular basis “ what goes up must come down” and if history has taught us anything this is absolutely true, another thing he used to say is “never be ashamed of taking a profit”.

This is one thing I will quite often tell my clients when selling precious metals or bullion (gold, silver, palladium and platinum) is always take a profit, if you can sell today for a profit then do it, everyday you make a profit is another day you’re not making  a loss.

This theory can be applied to the selling of Silver scrap and silver bullion. With the latest highs in silver prices, people are cashing in their old silver scrap jewellery, broken silver jewellery, old sterling silver service ware.

END_OF_DOCUMENT_TOKEN_TO_BE_REPLACED

We will also take a look at silver coins from other countries.

Maybe you’ve stumbled across some old silver coins but you’re not sure about what kind of silver coin they might be. Here’s a tip about identifying silver coins from home before bringing them in to EzyCash Gold Buyers’ Panmure store. END_OF_DOCUMENT_TOKEN_TO_BE_REPLACED

Overindulged at Christmas and New Year?

It’s easy to do and very enjoyable.  But what’s not so enjoyable is finding yourself in a bit of strife with your credit card.

You’ve spent more than you thought and need to clear some debt.

There’s no need to get a high-interest loan if you have gold at home because EzyCash Gold Buyers will buy gold from you for a top cash price to help get you out of debt.

It could be scrap gold, or broken gold, or gold from jewellery that you no longer wear.  Even a gold engagement ring from a former relationship.  Sell gold to EzyCash Gold Buyers.

Have a hunt around home – you may have gold jewellery and not know it. END_OF_DOCUMENT_TOKEN_TO_BE_REPLACED

Scrap gold, broken gold, gold jewellery, gold rings.  If you have unwanted gold and would like to sell your gold, bring it in to EzyCash Gold Buyers in Panmure, Auckland for an expert valuation of your gold.

The gold price continues to ride high – take advantage of this by selling your gold to EzyCash Gold Buyers.

Finding a gold-laden shipwreck in the sea.

END_OF_DOCUMENT_TOKEN_TO_BE_REPLACED

EzyCash Gold Buyers in Panmure, Auckland– we buy gold for a top cash price.  And we give you great suggestions on how to find gold.

In a previous blog, we recommended combing the ocean depths for gold in sunken ships.

gold found amongst a shipwreck off the Portugese coast.  Since writing that blog, the Spanish have won the argument and 17 tonnes of gold and silver (including 594,000 gold coins) recently arrived in Madrid aboard two military planes.

Will it be enough gold to solve the Spanish debt crisis?

Perhaps not, but it’s a substantial gold windfall nonetheless. END_OF_DOCUMENT_TOKEN_TO_BE_REPLACED

We are open under Covid Alert Red Traffic Light Level,
Please phone 5701511 for all Enquiries.